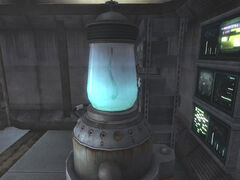 The Courier's spine in The Sink

Your spine is a quest item in the Fallout: New Vegas add-on Old World Blues.

The Courier's spine is removed by the Sink Auto-Doc, together with the heart and brain on arrival in the Big MT.

During the quest Old World Blues, the spine appears in the Sink and from this point on, can be returned at any time in the Courier's body (as well as removed again) with the same Auto-Doc.

Retrieved from "https://fallout.fandom.com/wiki/Your_spine?oldid=3282315"
Community content is available under CC-BY-SA unless otherwise noted.