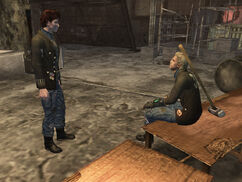 Janet (left) and Jack (right) together in the hangar

“Have you seen her? The redhead of my dreams?”— Jack

Young Hearts is a side quest in Fallout: New Vegas.

At the Nellis Air Force Base, a man named Jack can be spoken to, and with a successful 35 Speech check, the Confirmed Bachelor perk, or Black Widow perk, Jack reveals that he is in love with a girl named Janet, a Crimson Caravan employee he has never actually met. The Courier can agree to speak to Janet at her place of work, which is east of both Freeside gates. Speaking to her reveals that she has seen Jack from afar and that she is interested in him. With the Black Widow perk, there is an option to make her jealous and want to rush over, while with the Lady Killer perk, she will admit that she's dying to meet Jack. The Courier can tell her that they'll ask Pearl for permission.

To get Janet into Nellis, when speaking to Pearl, a successful Speech check of 50 garners Janet "a free pass to enter." Failing the check, the Courier must first complete the quest Ant Misbehavin' in order to be able to convince Pearl.

Return to Jack at the hangar, and he'll hand over Janet's Boomer outfit, and ask to have it delivered to her. Return to Crimson Caravan and give Janet the Boomer outfit, in which she will then ask for the Courier to speak with her boss, Alice McLafferty, about releasing Janet from her work contract. Alice agrees to let Janet go, but she forfeits her wages as a penalty for breaking the contract; however, with a skill check of Barter 65 or Speech 75, Alice can be convinced to pay Janet what she owes while also letting her out of her contract. Return to Janet to give her the good news, and she will immediately leave for Nellis, in which Jack will need to be spoken to again to conclude the quest, and receive a reward of 300 XP.