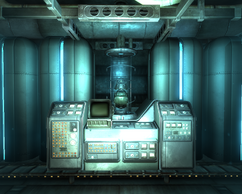 ...and so starts another arms race

Complete You Gotta Shoot 'Em in the Head

“What? Fuck me sideways! No, better yet, fuck him! I swear, I'll jam a grenade so far up his ass...”— Dukov, about Crowley

You Gotta Shoot 'Em in the Head is a side quest in Fallout 3. It is also an Xbox 360/PC achievement and a PlayStation 3 trophy.

Allistair Tenpenny once hired five mercenaries: Mister Crowley, Tara, Dave, Dukov, and Jeff Strayer to find a rare weapon in Fort Constantine. In order to get a bigger share of the reward, Dukov trapped Mister Crowley (a ghoul) in a room with feral ghouls. Crowley, who survived despite what everyone else believed, is now a resident of Underworld. Tara died in Fort Constantine and the three remaining mercenaries escaped and completed the mission.

Talk to Mister Crowley in the Ninth Circle or at Carol's Place in Underworld, but do not insult him when you first speak to him or he will not give you the quest. He gives you the task of finding and killing Dave (at the Republic of Dave), Ted Strayer (in Rivet City), Dukov (at Dukov's Place), and Allistair Tenpenny (at Tenpenny Tower). He says they are ghoul-haters, and he wants them each killed with a shot to the head (as zombies are killed in fiction). For that purpose, he will give the player a sniper rifle and five .308 caliber rounds. Crowley offers 100 caps per death by headshot with the sniper rifle as payment. He says that "word will get around" if Tenpenny is killed, but he wants proof for the others: "something personal... like a key or a ring."

Bribing or passing a speech check with any of the named non-player characters (excluding Charon) in Underworld—Ahzrukhal, Carol, Doctor Barrows, Winthrop, Patchwork, Tulip, or Quinn—will raise doubts about the targets' bigotry. Under questioning, Crowley will admit that he actually wants a special key from each target except Tenpenny. He still wants Tenpenny killed with a shot to the head. Instead of 100 caps per headshot, he will sweeten the deal by offering 100 caps up front plus an additional 100 caps for each key. Mister Crowley's objective is the suit of T-51b power armor still stored at Fort Constantine. You can learn about Fort Constantine and the power armor from Crowley (with a speech check). Other than the additional reward, the conditions of the quest do not change by learning this.

Tell Allistair Tenpenny that Crowley sent you to kill him. After a successful speech test, Tenpenny will offer 300 caps if you agree to kill Crowley instead.

The keys can be obtained by Speech checks, pickpocketing, or by looting the key from the owner's corpse. They may be collected in any order and can be delivered to Crowley one at a time or all at once.

Jeff Strayer is dead, but his son, Ted Strayer, is now in possession of his father's key. Ted lives in Rivet City.

Dave can be found at the Republic of Dave.

Deliver the keys to Crowley

Kill Allistair Tenpenny and give Mister Crowley all three keys to collect your reward. He will then proceed to Fort Constantine to retrieve the armor. He will return to Underworld after a few days (provided he did not get killed in the Wasteland). At this point, one can kill him, which will turn all ghouls in Underworld hostile, or use reverse-pickpocketing in order to obtain the armor (he will be wearing it).

Retrieve the armor yourself

Proceed to Fort Constantine after obtaining the keys. Fort Constantine is located near the northern edge of the map, east-northeast of SatCom Array NW-05a and southeast of the train tunnel if The Pitt is installed. When you arrive at the fort you will encounter some Brotherhood of Steel Outcasts fighting protectrons and Mister Gutsies. Go to the small house labeled "CO Quarters," located downhill from Bomb Storage, and head downstairs. In the basement you will find a dead wastelander by an open safe. The door by the safe requires Strayer's key, and allows you access to the Launch Control Bunker. You can also grab the "Bobblehead - Big Guns" from the safe while you're there. Continue down the stairs towards Bomb Storage; you gain access here with Dukov's key. Inside the Bomb Storage facility, you will find Tara's body in front of a locked door. Open the door with Dave's key, proceed through the next door, disable the stasis field and take the T-51b power armor and T-51b power helmet.

There is a warhead storage key on Tara's body. It unlocks a door that's just up a set of steps from here. This leads to a large room where nuclear warheads are stored, and the area is consequently highly radioactive. This key also opens either of the Very Hard locked doors topside that lead to the Bomb Storage facility.

If you choose this solution, Mister Crowley can still be found in Carol's Place in the Underworld. He does not become hostile, but refuses to interact with the PC anymore, only repeating his line: "You stole what was rightfully mine..."

Deliver the keys to Crowley and retrieve the armor yourself

Kill Allistair Tenpenny and give Mister Crowley all three keys to collect your reward, then follow Crowley on his long journey to Fort Constantine. He will require a lot of protection from enemies in the Wasteland or else he will die along the way. Crowley will become hostile upon reaching Fort Constantine, at which point you can kill him to retrieve the keys. Or one can simply follow him into the lobby of the museum and kill him there (you will not lose any Karma).

If you don't want to follow Crowley, you can collect the keys (and kill Tenpenny), and then go directly to Fort Constantine. Clear the fort of enemies, open all the quest-related doors, but don't grab the armor. Then go to Underworld, give Crowley the keys to end the quest and collect your rewards, and finally fast travel back and grab the armor. Using this approach there is a possibility to come across a hostile Mr. Crowley at a random location in the wasteland, probably stalking the player for stealing "His" armor.

The quest is marked as completed and the achievement/trophy given under any of the following conditions:

Retrieved from "https://fallout.fandom.com/wiki/You_Gotta_Shoot_%27Em_in_the_Head?oldid=3495393"
Community content is available under CC-BY-SA unless otherwise noted.