You're SPECIAL! is a book published and written for children by Vault-Tec. This book identifies the seven key attributes that are viewed the most desirable in a vault resident. The attributes are as follows in order: Strength, Perception, Endurance, Charisma, Intelligence, Agility, and Luck (S.P.E.C.I.A.L.). Each of the attributes are given a brief description.

This book is the first opportunity the player character has for building their personality and skills. Each of the attributes are initially assigned five points. There are an additional five points for distributing across each attribute. This gives a total of forty points (5 x 7 = 35 points + 5 points = 40 points) that can be distributed among each attribute. The maximum number of points allotted to an attribute is ten points, with the minimum being one. 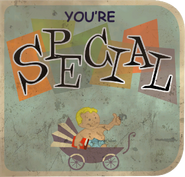 The book in Fallout 4

Attribute bonus from the book in Fallout 4