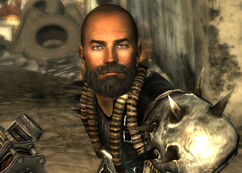 “Why would the past matter when now is so good?”

Ymir was born in 2232. He and his son, Jotun, are Paradise Falls's pair of knuckleheads. Jotun has difficulty forming basic sentences, while his father is a jovial madman, armed with a horrific-looking super sledge, like his son's. Ymir isn't fond of Frank, the bartender, and may make this abundantly clear by bludgeoning Frank to death. He loves drinking, fighting and drinking some more, rounding a day off with a spot of fighting.[1]

Ymir is the father of Jotun.

Ymir appears only in Fallout 3.

In Norse mythology, Ymir was the founder of the race of jötunn and was an important figure in Norse mythology. Ymir's body was used to create Midgard, the earth at the center of Ginnungagap.

Retrieved from "https://fallout.fandom.com/wiki/Ymir_(Fallout_3)?oldid=3329704"
Community content is available under CC-BY-SA unless otherwise noted.