Ring-a-Ding-Ding!
Wild Card: Ace in the Hole
Wild Card: Change in Management
Wild Card: Side Bets
Wild Card: You and What Army?
Wild Card: Finishing Touches
No Gods, No Masters

VMQTopsYesMan (the Tops)
L38YesMan (Lucky 38)
YesManMainframe (mainframe)
“You did a super job wrapping things up! And I'm not just saying that because I have to!”

Yes Man is an AI program that serves as Benny's assistant and right-hand man in 2281. He is a modified PDQ-88b securitron with a unique personality, serving as an integral part of Benny's scheme to take control of New Vegas. Yes Man will assist the Courier directly in the Independent New Vegas main questline.

Yes Man was originally a generic securitron robot programmed to work for Mr. House like all the other securitrons found on the Strip. He was recovered by Benny and several of the Chairmen after being damaged by a pulse grenade. Following this incident, Followers of the Apocalypse member Emily Ortal examined the securitron in order to learn Mr. House's secrets in exchange for reprogramming him for Benny's personal use.[1]

The reprogramming was extensive, and resulted in Yes Man being designed to do exactly as he is told; thus, Yes Man is not just the program's name, it's also his job description. Yes Man is completely incapable of declining any order or withholding any information he is asked for, no matter who he is interacting with. Benny's plan was to dispose of Mr. House and install Yes Man's A.I. onto the Lucky 38 mainframe, putting Yes Man (and by extension, himself) in control of all the securitrons on the Strip. Yes Man's main objective was to use his connection to Mr. Houses' internal databases and feed valuable information to Benny so that he could stay one step ahead of House.[2]

After navigating these databases, Yes Man discovered various mathematical calculations regarding the Strip's defensive capabilities and plans to arrange a Courier to deliver a platinum chip. After feeding this information to Benny, Yes Man helped to notify him of all the routes, arrival and leaving times and potential ambush areas where the chip could be retrieved and the Courier disposed of without Mr. House learning of Benny's actions. This information leads to Benny recruiting members of the Great Khans and journeying south to the Goodsprings Cemetery where they successfully capture and neutralize the Courier, stealing the Chip and burying the Courier, leaving their abductee to die. Benny soon betrays his entourage, leaving them to fend for themselves against the NCR in Boulder City and returns to the Strip where he idles around in the Tops surrounded by his personal detail.[3]

Once the Courier arrives on the Strip, Yes Man will divulge all of Benny's plans to usurp power and offer his services to this new arrival. If the platinum chip is recovered, Yes Man will reveal the full extent of his plans to dispose of Mr. House and replace him, availing to serve the Courier in any way should they succeed. Continuing without Benny, Yes Man will gladly serve the Courier and will follow any command given, essentially giving the Courier full control over the Strip and allowing any actions to be taken on the other factions vying for the Mojave Wasteland. Although Yes Man will give his opinions and advice on how to deal with other groups, the only factions that must eventually be confronted are either the NCR or the Legion depending on the choices made.[4]

Once the Courier's power and relations are solidified, Yes Man's next step is to activate an army of upgraded securitron Mk II's, using the platinum chip to distribute this software to all active securitrons, increasing their offensive and defensive capabilities. Before the final confrontation at Hoover Dam, Yes Man will require an override chip to be installed in the NCR occupied El Dorado substation, intending to divert power to the Lucky 38's dormant reactor thus being a vital strategic point for power should Hoover Dam be damaged or destroyed during the battle.

Yes Man will also request the Courier to enlist the help of the Followers of the Apocalypse although this is optional. Once the preparation is complete, the final confrontation can result in the Courier diverting power from the Dam to the securitron army on stand by beneath the Fort, defeating the Legion and betraying the NCR, expelling both factions and leading a "truly independent" New Vegas as originally envisioned by Benny, with the decisions made by the Courier forever shaping the Mojave.[5][6]

Yes Man is initially located in Benny's suite in the Tops casino. To gain access to Yes Man, the Courier must either kill Benny in the casino, sleep with him (requires the Black Widow perk), present Swank with evidence of Benny's treachery, or confront him and force him to flee to The Fort.

To find Yes Man, enter the Tops casino and proceed straight ahead past the casino floor to the elevator bank (near the sign that says "Elevators out of Order"). Take the second elevator on the right to the 13th floor. Exit the elevator, turn right, and enter the third set of doors on the left side of the corridor (double doors with potted trees flanking them). Go into the room and through the hole in the wall in the back of the room.

After the player character finishes Ring-a-Ding-Ding, Yes Man will be located in the front of the Tops casino, where the Courier can engage with him to continue the questline if they so choose.

Yes Man after being installed into the Lucky 38 mainframe

Yes Man in Benny's room at the Tops' 13th floor

"No Gods, No Masters" quest 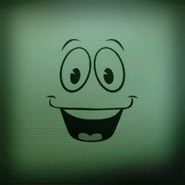 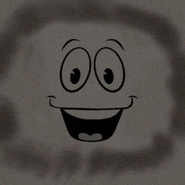 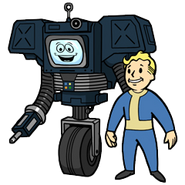 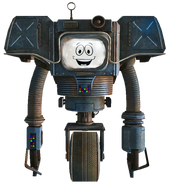