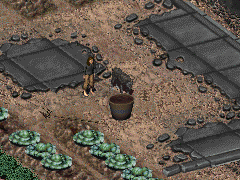 Giving the dog some meat jerky will make it act as a temporary companion. The dog will not be a companion when the Chosen One leaves the area, but will still follow them around Klamath Downtown.

Contrary to its name, the Yellow Dog is, in fact, not yellow, but a black color instead.

Retrieved from "https://fallout.fandom.com/wiki/Yellow_dog?oldid=2886979"
Community content is available under CC-BY-SA unless otherwise noted.