Crazy Morning
“Pleased to meet you. My name's Yasmin, and I'm a traveling chef making my way through Appalachia.”

Yasmin Chowdhury is a potential C.A.M.P. ally and merchant found in Appalachia. She was unlockable upon reaching rank 25 of Season 3: The Scribe of Avalon, and a plan for her was released with the Night of the Moth update.

Yasmin was born and raised in Philadelphia before the Great War, spending her whole life there until she left for culinary school. It had always been her dream to own her own restaurant.[1] Yasmin originally wanted to become a chef, allegedly an act of rebellion against her parents, as they were both academics who wanted Yasmin to obtain a career in the same field. As Yasmin continued showing interest in cooking, her parents came to understand and accept that her interest in cooking was not just a phase. Yasmin's fascination in food and the culinary arts began when helping her grandmother make confectionaries known as sandesh to celebrate Yasmin's sister's birthday. After that, Yasmin assisted her grandmother in all her cooking endeavors.[2]

After the Great War, she joined a group of survivors building a settlement in the ruins of an old resort in the Poconos. For 15 years, they lived in peace before a group of raiders attacked. Those who were not killed were scattered, and the town was destroyed. Yasmin headed toward Appalachia, meeting many travelers on the way. It was the stories of the creations of Delbert Winters that ultimately guided her way.[3] Although a very unlikely event, she still holds out hope that she will reunite with her parents and her sister someday.[2]

In the time since, Yasmin has become a traveling chef who passionately collects recipes, traveling from place to place. At each stop in her travels, she stays with the locals and swaps stories and recipes, as well as teaching others how to cook. Although she wanted to open a resturaunt before the War, after moving to Appalachia, she felt it would be better to open a cooking school to help preserve the culinary arts for generations to come, as recipes that were easy to find or collect before the War were lost or forgotten after it.[4] While she has a very outgoing and bubbly personality, she is always perfectly content to keep to herself to crank out innovative new recipes that are almost always edible.

Having been in Appalachia for some time by 2103, Yasmin may take interest in a Vault Dweller's C.A.M.P. and ask to stay a while so that she can perfect local recipes, offering a wide array of plates and delicacies for anyone to enjoy. In her time in Appalachia, one of the first individuals she met was a hunter, who taught Yasmin how to spot animal tracks, while Yasmin taught her how to make meals out of any animal caught. She has furthered this knowledge into hunting, field dressing, and cooking many of the local Appalachian fauna.[5] Yasmin has also visited Helvetia, determining to visit once more after potentially being informed of Fasnacht Day.[6] She shares a similar gratitude and enthusiasm for Meat Week should she be informed of it, wanting to participate in a giant cookout and sharing secrets with the "grillmaster".[7]

Interaction with the player character

In dialogue, the player character can ask Yasmin about rare food, give her Scorchbeast mixed meat stew and receive a Survival syringe in exchange. This interaction can only be performed once.

Yasmin Chowdhury appears only in Fallout 76, introduced in the Steel Dawn update. 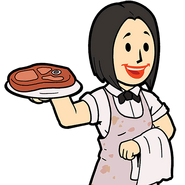 Vault Girl depiction, in the Scribe of Avalon gameboard 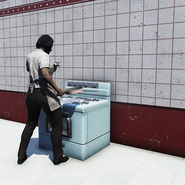