Fallout 3
“Nan needs to cut it with the crap stories about beasts lurking in the depths of the cave. Nonsense is scaring the kids. I have set up makeshift barriers until we have time to make permanent ones. The barriers are there more for my own sanity than anything.”

The yao guai tunnels is a location in the Capital Wasteland in 2277. They are located due west of the Charnel house, and northwest of Smith Casey's garage. The entrance is a chain-link fence door in a rocky outcrop. As the name suggests, the caves are inhabited by a large number of yao guai.

If Broken Steel is installed, after The Waters of Life, there will be an Enclave camp on the small bluff directly east of this position. The soldiers stationed there will usually be dead, with clear signs of a struggle all around the camp. A Vertibird has also been known to land nearby, as well as other mini-encounters involving Enclave soldiers.

A fairly straightforward cave with one main central intersection and a few smaller dead end branches off to the sides. Several wastelanders have attempted to make a home here at one time or another, as evidenced by the mattresses, cooking impliments, ammo containers and various other bric-a-brac.

The den portion of the tunnels lies in the eastern area of the cave, with another entrance in the southern section than can only be accessed from inside the yao guai den. The easiest way to reach the den is to travel generally eastward until a few yao guai are seen running across the Lone Wanderer's path from left to right. This is a scripted event, and the yao guai will not always be targetable in V.A.T.S. (only with proper timing) on either Playstation 3 or Xbox 360.

If the player character has the Animal Friend perk, this event is different: the yao guai may or may not stand instead of rushing right to left. At this intersection, marked by a lantern on the left and an overturned bathtub to the right, turn left (north). Continue onward to find a Nuka-Cola Quantum on a table, and turn right (east) there. Continue on this path until reaching a cavern with two exits leading south. Follow either path generally southward, past a stop sign and a downed chain link fence, to the entrance into the yao guai den.

The den is a roughly circular chamber with northern and southern tunnels leading back to the caves. On the northeast side of the central pillar and at the base of the ramp leading up is the Sneak bobblehead perched on a metal box. There is a crescent-shaped pool on the other side of the central pillar where the yao guai den note can be found on a dead settler floating in the water.

The yao guai tunnels appear only in Fallout 3. 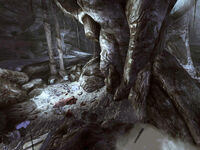