Honest Hearts
“Yao guai - even our strongest hunters could not hope to kill so many. There must be a nest nearby.”— Waking Cloud

The yao guai cave is a location in Zion Canyon in 2281.

The yao guai cave consists of a series of small tunnels leading to a large central cavern containing three yao guai. Upon entering, the paths will fork; the uphill path to the right will dead end at two skeletons, the left hand path downhill being the only option. At the next fork, going straight will lead to a high vantage point over the central cavern. It is possible to attack from here by hopping up onto the rock blocking the view of the cavern below. An invisible barrier will block all shots unless the yao guai are against the western wall of the large cavern or near the middle. If they are below the player, then the shots will hit the invisible barrier. 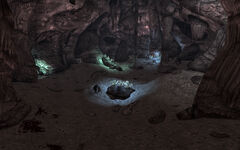 The central cavern of the cave
Deutsch Español Русский Українська
Community content is available under CC-BY-SA unless otherwise noted.
Advertisement