The yao guai is a mutated bear of debatable origin species in the Commonwealth. Possibly mutated from the black bears native to the region, these yao guai are generally larger than their unmutated predecessors and are more aggressive. The physical build of the Commonwealth variant does not seem to drastically deviate from pre-War bears as much as the yao guai in the Capital Wasteland and Zion Canyon. Comparatively, they are overall less dog-like in their posture and movement, sport thicker patches of fur, and more body fat. Since their upper body, chest, and arms are not as massive, the Commonwealth yao guai have a more traditional bear-like posture and gait. 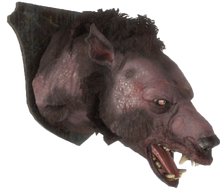 A mounted yao guai head
Add an image to this gallery
Retrieved from "https://fallout.fandom.com/wiki/Yao_guai_(Fallout_4)?oldid=2882354"
Community content is available under CC-BY-SA unless otherwise noted.