Fallout 4
Far Harbor
Nuka-World
“Originally named by the descendants of those held in Chinese internment camps before the Great War, the Yao Guai is a ferocious mutated bear.”— Fallout 4 loading screen hint

Named by descendants of those held in Chinese internment camps before the Great War, yao guai are mutated American black bears.[1][2] They are one of the more vicious creatures of the wasteland, having razor sharp claws and teeth, and a nasty temperament.[3]

Yao guai are large, mutated ursines that are descended from the bears that lived across America before the Great War. They are able to reproduce, as evidenced by the presence of cubs. Wild yao guai will attack nearly any other animals or people they encounter, including deathclaws. Despite this, yao guai exhibit a gentle, familial bond toward one another when found together and can even be domesticated.[4]

Unlike many other creatures, yao guai do not take increased damage from being shot in the head.

Found in a cage in Nuka-Town backstage, this yao guai is kept by the Pack. 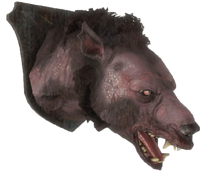