Fallout 3
“Don't feed the yao guai! That is all.”— Three Dog

Yao guai are creatures found in the Capital Wasteland in 2277.

They can be encountered across the entire Capital Wasteland in and around craggy, hilly places, or in caverns. There are two spots where one is guaranteed to come across concentrated populations of yao guai, including the yao guai tunnels and the yao guai cave. Yao guai are generally found in pairs or sometimes wandering alone, frequently at night. Some wasteland scavengers travel with a yao guai companion. They will not attack on sight and can be approached safely, although they will defend themselves and their ally if threatened.

Yao guai attack by using running pounces followed by slashes and bites after closing the distance to their target. Like all creatures with pounce attacks, the yao guai cannot pounce with a crippled hind leg. However, even with a crippled limb, it will resume charging after a split second. Yao guai have a high Perception, and do not require a direct line of sight to notice the presence of others. Yao guai are affected by the Animal Friend perk. They are sometimes friendly towards bloatflies.

The standard yao guai with all characteristics listed above. Prime locations are in the cliffside cavern and the yao guai tunnels, but they can also be found across most of the wasteland.

These yao guai seem domesticated. They travel alongside scavenger-merchants, defending them against any threat that may arise.

Yao guai seem to be unusually prone to physics glitches, which may cause them to fly or launch when killed. This is most common when one is killed mid-air, usually with a combat shotgun.[verified]

A couple of yao guai 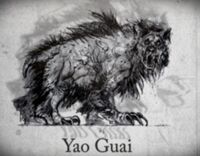 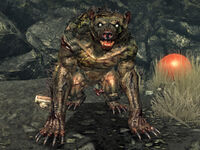 Tamed yao guai next to a scavenger

A yao guai in cryogenic stasis in the Raven Rock