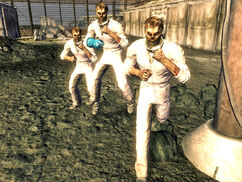 Prior to the outbreak of the Great War, Chinese citizens were often rounded up and placed in internment camps such as Little Yangtze. What sets the survivors of Little Yangtze apart is that the scientists at Big MT were periodically snatching them from their camp and performing sickening experiments on them. Borous in particular based many of his experiments around the fact that the Chinese were presumed to be Communist spies, and had no qualms about having cyberdogs eat them.

To enforce the security of Little Yangtze, the survivors were fitted with "total suppression" collars, which were later used by Elijah for assembling teams to raid the Sierra Madre. The collars are still active and will detonate if the survivors attempt to leave the camp. The jumpsuits the ghouls are dressed in are identical to the jumpsuit worn by the Courier at the start of Dead Money.

The abuse they suffered, combined with two centuries of isolated imprisonment, has left them hostile towards all visitors to their section of the Big MT. The population of Yangtze camp survivors that are still alive inside the cramp confines of Little Yangtze is extremely small; usually, only about 4 survivors can be found inside Little Yangtze when visiting that location. The Yangtze camp survivors are a one-time encounter, and new ones will not spawn once these 4 are killed.

Yangtze camp survivors have slightly more health than lobotomites or Y-17 trauma override harnesses, but have almost no armor and no proper weaponry, being limited to fighting with either their fists or very low level melee weapons.

Number 27 and Number 34 are Yangtze camp survivors who seem to have managed to escape the fence.

When approaching the camp from the east gate, Yangtze Survivors may run onto the lockers near the east gate while attacking, becoming stuck, and appearing to be trying to run toward the fence; they become easy targets but will become unstuck if they take too much damage, and attack the Courier normally. [verified]