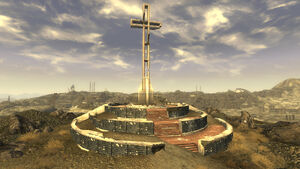 “There was a great war long before we were born. Our gallant soldiers fought from the Yukon to the Yangtze.”— Dick Richardson

The Yangtze Campaign was a military operation conducted by the United States after the successful Chinese occupation of Alaska in 2066. It took place at the Yangtze River watershed in China.

American forces invaded east-central China in 2074 and remained there until the Great War in October 2077. During its course, American T-45 power armor units, infantry and mechanized divisions were deployed in China, but they became bogged down on the mainland, putting a further drain on American resources and supply lines. The tide of the war was changed in 2076 when T-51 power armor finally finished development, and the first unit was sent to China where they finally began to beat the Chinese forces. Chinese supply lines from the nations China had annexed began to break down, leading to the loss of the major cities of Shanghai and Nanjing.[2][3][4] The Yangtze Memorial was erected in Nevada to commemorate the soldiers that gave their lives during the campaign.[5]

The Yangtze Campaign is mentioned in Fallout 2 by President Dick Richardson.[6] and Fallout: New Vegas both on the Desert Ranger combat armor,[4] and with the Yangtze Memorial.

Retrieved from "https://fallout.fandom.com/wiki/Yangtze_Campaign?oldid=3313060"
Community content is available under CC-BY-SA unless otherwise noted.