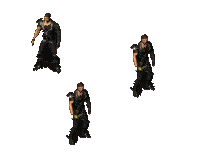 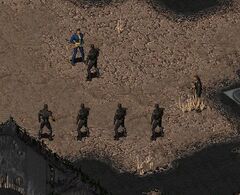 The Chosen One encounters some Yakuza members

“Better a live coward than a dead hero.”

The Yakuza is a mafia faction operating around New Reno in 2241 and based on the remains of the pre-War Yakuza.

Yakuza are known as the pre-War Japanese mafia. Nowadays, the descendants of the Yakuza are around New Reno, perpetuating the tradition of their expertise in swordplay and throwing weapons. They have no known headquarters and travel in small bands, fighting against New Reno's mobsters and scouting the Wasteland around New Reno, never succeeding in entering into the city. Following the war, the Yakuza seems to have diverted from their traditional bushido code, with many members remarking on how they would prefer dishonor through fleeing than an honorable death.

The Chosen One can sometimes randomly encounter Yakuza raiding parties around New Reno.

The Yakuza appear only in Fallout 2.

The Yakuza in Fallout 2 are based on a real world group of the same name, this Yakuza being a transnational organized crime syndicate originating in Japan.