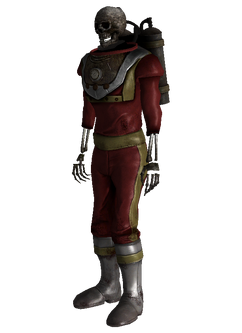 “Hey, who turned out the lights?”— Wild Wasteland

Y-17 trauma override harnesses are walking corpses, animated by robotic harnesses, in the Big MT in 2281.

One of the most impressive inventions created in Big MT's Y-17 medical facility, the Y-17 trauma harness is a full body suit designed to automatically retrieve injured soldiers and return them to their home base by automatically taking over their motor functions and "walking" them to the base. A complex network of artificial muscle and fibers encases the user and enables this functionality (rather than the crude hydraulics that dominated military technology circa 2077). The suit can also effectively "learn" new behaviors by recording neuro-auto-muscular movements, up to and including shooting and fighting reflexes.[1] The suit tracks the vital functions of the user and, once a certain injury threshold is reached, it takes over the motor functions of the user and walks them to the designated home base out of harm's way.

However, as the Big MT research teams soon learned, the harness design had several design problems that precluded it from entering general production, at least, until the issues were rectified. The primary problem was that calibrating the injury threshold that would trigger the suit was problematic, leading to unpredictable behavior. The harness is also unable to identify whether the occupant expired and will continue to function, even if they are completely dead. This functionality was quickly considered a "feature," as autonomous corpse retrieval would also be useful on the battlefield.[2]

The enthusiastic approach to this new technology was premature. If no home base was designated for the suit, suits would enter an unpredictable wander state. Completely lacking any IFF software and with no way to identify friendly targets or respond to shut-down commands, this would be equivalent to a berserk mode should a harness unit be able to replicate combat behavior.[2] This is exactly what happened when, amid the chaos caused by malfunctioning technology and the Great War, scientists, soldiers and even test subjects would die and trigger the wander state, using the replicated combat behavior and attacking everyone in sight. One of the first such incidents occurred at the X-8 research center. The situation only went downhill from there.[3]

The Y-17 trauma harnesses resemble nothing else than the walking dead, skeletons clad in red rubber suits, heads encased in spherical glass helmets. The suits have oxygen tanks on their backs, which is in turn attached to additional armor plating around the neck and shoulder area, the area in which the helmet is hermetically sealed to.

The basic harness comes in several different varieties that are calculated to match the Courier's level. Their armaments may also vary quite a bit depending on the player character's level. Although they have exactly the same medium-to-high amount of Hit Points as lobotomites, on balance Trauma Harnesses are much more dangerous opponents, since they have much better armor as well as a wider variety of weapons available. At higher levels they can be seen wielding heavy incinerators, Gatling lasers, Tesla cannons, Gauss rifles and even plasma casters.

With the Wild Wasteland trait, the Y-17 master trauma harness will say "Hey, who turned out the lights?!" This is a reference to the Doctor Who episodes "Silence in the Library" and "Forest of the Dead" when a group of microorganisms called the "Vashta Nerada" ate a character (Proper Dave) during one of the episodes. Said character had been wearing an environmental suit that shares a passing resemblance to a space suit, and his skull had been pressed to the visor on his helmet while the Vashta Nerada inside the suit made it walk around, similarly to the helmet-wearing trauma harnesses. The suit also had a thought based communication system that tended to retain echoes of the user's consciousness known as "data ghosts" that deteriorated into repeating single sentences, "Hey, who turned out the lights" being the sentence repeated by the suit after Dave's death.