Old World Blues
“Got hit by the explosions. Woke up here. Guess the medical robots were programmed to bring wounded victims from the camp to this center. Some kind of Auto-Doc prototype lab... manned by corpses trapped inside suits that keep them moving, no idea why.”— Christine Royce

The Y-17 medical facility is a location in Big MT in 2281. It is directly southwest of the X-8 research center.

The facility consists of a large main room, consisting of two levels, and a side room. The main room is filled with computers and desks surrounding a buried and inoperative Auto-Doc in a lower area, in the center of the room. A unique Mister Orderly robot named Doctor Orderly MD PHD DDS resides here along with two others.

The side room is blocked by a force field which can be disabled with an upgraded sonic emitter. Upon taking the sterilizer glove from the console in the side room, three lobotomites will spawn at the entrance of the facility.

According to Joshua Sawyer, it was in this complex that Christine Royce was disfigured.[Non-canon 1] 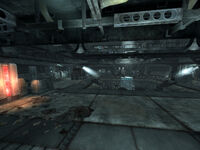 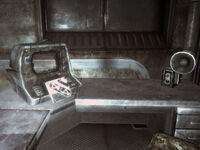 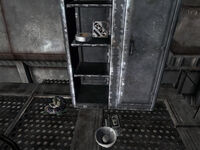 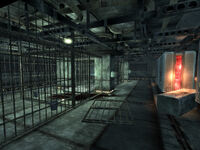 A cellblock in the back, Patient log: Y-17.0 next to the torn of cell door