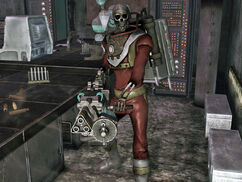 The Y-17 master trauma harness is the walking corpse of Mr. Harris, animated by a robotic harness in the Big MT in 2281.

The harness was designed at Big MT's Y-17 medical facility with autonomous casualty recovery in mind. The suit tracks the vital functions of the user and, once a certain injury threshold is reached, it takes over the motor functions of the user and walks them to the designated home base. It is a miracle of research, employing intelligent fibers and artificial muscle, rather than the crude hydraulics that dominated military technology back in 2077.

However, due to the prototypical status of these suits, they suffer from several major issues. First, if a home base is not defined, the suits enter an unpredictable wander state. Second, while it is possible to calibrate the upper injury threshold for the override to kick in, the sensors cannot detect if the user is still alive. Third, the suits record all user movements and can effectively "learn" to replicate their shooting and fighting reflexes, but lack any IFF software. All of these issues combined have led to them breaking out of the Big MT's research facilities and wreaking havoc around the crater.

The master trauma harness was worn by a Mr. Harris, a researcher at the X-12 research center, having malfunctioned before the war after Harris choked on a buffalo gourd seed. The harness began attacking other employees, who were forced to seek assistance from X-8 researchers and were granted the K9000 cyberdog gun in return. However, while the researchers tried to subdue the berserk harness, the person carrying the K9000 slipped and dropped it. Unarmed, the team had to flee, but not before sealing the X-12 research center with a forcefield. For two centuries, the harness was kept beneath the forcefield, armed with the K9000.[1][2]

With the Wild Wasteland trait, one of the audio logs for the Y-17 master trauma harness is a reference to Doctor Who episodes 'Silence in the Library'/'Forest of the Dead'. In these episodes, the protagonists are chased after by creatures which possess space suits after rapidly consuming the flesh of their inhabitants, leaving only the bones. The last words of the suits' inhabitants loop endlessly. The last audio statement of one such suit from the episode, and a line heard when encountering the trauma harnesses is "Hey, who turned out the lights?"