Xian is one of the younger, more stubborn scientists at the Boulder Dome in 2253.

Xian is a curious, logical woman who doesn't smile much. She grew up in San Francisco as part of the Shi, but while still fairly young, she moved to NCR as part of an exchange program. She went to the university there, studying Biology and Science. At the time, Presper was recruiting scientists that would travel by train to the Boulder Dome to study and help get work done there. She was one of the students who graduated and was immediately moved to Boulder.

Before the PC's arrival, Xian realized just how much she disliked Goddard, and started taking 'hikes' to look for any secret exits in the toxic sub-levels of the Dome that could provide her with a means of escape.

Research Plague Data - The player character first finds Xian in the secret tunnel entrance, almost dead due to a lack of oxygen. When asked why she doesn't just take off her suit, the player character learns that she is infected with the New Plague as well, and she refuses for their safety. However, the player character can bring her to one of the decontamination centers to clean her up and give her a new supply of oxygen (though she still requires medical help).

Xian has not appeared nor is she mentioned in any published game. She was to appear only in Van Buren, the canceled Fallout 3 by Black Isle Studios. It is not certain if she will appear in any future Fallout game. 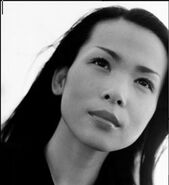 Image used as concept design for Xian in the Van Buren design document.