View source
watch 24:51
Fallout Interactive Experience
Do you like this video?
Play Sound
Fallout 76 / Night of the Moth ally

Fallout 76
Night of the Moth

MaleEyesGhoulPale
“That was your first mistake. Thinking. But please rest assured, you won't have to think any longer, once we invade and subjugate your people. In fact, thinking will likely be made a crime punishable by death, followed of course by having to watch a series of instructional videos. Given that there are 1,757 stages of hell in the Zebulon afterlife, you will have ample time to watch these videos and reflect on your mistakes.”

Xerxo is a potential lite ally living in Appalachia. He was unlockable upon reaching rank 50 of Zorbo's Revenge season, and a plan for him was released with the Invaders from Beyond update.

Xerxo is a ghoul who believes he is from another planet and claims he is from the Zebulon Empire, a reference to a film Invaders from Beyond Our Galaxy that was complete but never released in cinemas, because the Great War happened a couple months before its release. Xerxo claims he is a space captain, brilliant military tactician and very handsome. He claims his father is Xarlax, and either Xerxo or Xarlax is the captain of the starship Voxthaltha of the Zebulon Empire.

Xerxo says he wants to invade and subjugate humanity and take over Earth, will probably make thinking a crime punishable by death, and will force people to watch a series of instructional videos. Xerxo believes humanity is screwing up Earth, and so the Zebulons will clean it, renovate it, and sell it to the Martians at twice the cost. Before the invasion, Xerxo wishes to study humanity and try to mate with them, as people often spill their secrets after, although he mentions he is only allowed to perform a Zebulonian love dance with high ranking government officials.

His spacesuit has the name "Blast" on it, although Xerxo believes they are ancient Zebulonian runes that say his name. Blast Hannigan is a character in Invaders from Beyond Our Galaxy, and it is suggested Xerxo's real name and identity is Elliot Manfield, the actor who portrayed Blast. Xerxo has had a dream where he was called Elliot. Xerxo suggests Elliot is a shell of himself trying to find a way to cope in a world he simply does not understand. Xerxo also mentions he has already seen Invaders from Beyond Our Galaxy, suggesting he really is Elliot.

Note: The 50% fewer fast travel caps cost can stack with Travel Agent for an upwards of 80% reduced cost.

Xerxo appears only in Fallout 76, introduced in the Night of the Moth update. 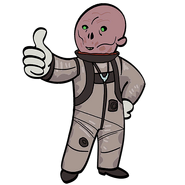