+1 Hit Point per second for 4s
Hardcore mode only:
-5 Starvation

By a Campfire on the Trail

Xander root is a consumable item in Fallout: New Vegas.

Xander root is commonly found growing around trails, rocks, and around the mouths of caves as well as in the open desert. It is visible via a tall green stalk, the root partially protruding out of the ground. Once collected, xander root can be used in the crafting of both healing powder and stimpaks. The roots will regrow after being harvested.

Some traders "sell" xander root, despite it not being worth any caps. Therefore, when trading, it can be acquired for free. 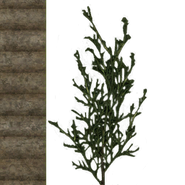