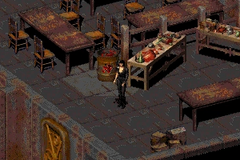 She has the only XL70E3 on the tanker
“This was an experimental weapon at the time of the war. Manufactured, primarily, from high-strength polymers, the weapon is almost indestructible. It's light, fast firing, accurate, and can be broken down without the use of any tools.”— Fallout 2 description

The XL70E3 is a small gun in Fallout 2 and Fallout Tactics.

This weapon has a superior damage per shot compared to the AK-112 assault rifle albeit inferior in range and capacity. The XL70E3 sees decreased efficacy against advanced power armor but will fare better against lesser armored enemies in the wasteland.

The XL70E3 is based on the RSAF Enfield XL70E3, a prototype version of the SA80 family of firearms adopted by the British Armed Forces in 1987.