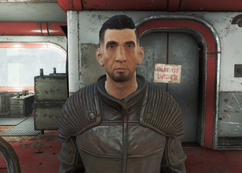 X9-27 is a courser, and as most coursers encountered above ground, he is in the process of completing orders given by the Institute. Encountered during the Operation Ticonderoga quest, he will not attack the Sole Survivor immediately, due to this quest occurring after the player character has been to the Institute. Because of this, all synths remain non-hostile until attacked. This gives the player character a chance to talk to him if they want.

Unlike the encounter with Z2-47, X9-27 is accompanied by a group of synths and another courser, who is referred to as the "second unit" by X9-27.

Retrieved from "https://fallout.fandom.com/wiki/X9-27?oldid=3327181"
Community content is available under CC-BY-SA unless otherwise noted.