Beard01
“It's not a man, it's a synth. A synth that's confused and dangerous.”

X6-88 is a synth working as a courser for the Institute in the Commonwealth in 2287. He is a possible companion to the Sole Survivor.

X6-88 is an Institute courser, designed for high-risk assault and retrieval operations above ground. X6 is very capable of engaging enemies at range and is equally capable of direct assault and more subtle approaches. He speaks in an animated, robotic style fashion.

Shortly after arriving at the Institute, Father tasks the Sole Survivor with helping to retrieve the leader of a band of raiders, Gabriel, a mind-wiped runaway synth formerly known as B5-92 from Libertalia. X6-88 is the courser dispatched to aid in this task. Completing the later quest Mankind - Redefined makes him available as a companion for the Sole Survivor. He can be found at the Synth Retention Bureau. If he is not there, he can be found north-northeast of Nordhagen Beach settlement near a beached fishing boat. 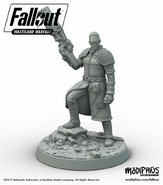