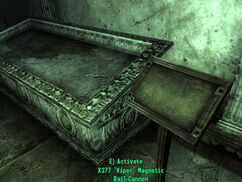 The X277 "Viper" magnetic rail cannon was a weapon that was displayed in the Museum of Technology sometime before the events of Fallout 3.

The X277 "Viper" magnetic rail cannon was developed for the U.S. Military by West-Tek. Also commonly referred to as a "railgun", the weapon uses energy cells to propel a depleted uranium round across a series of magnets discharging it at extremely high velocity. Deemed too costly to produce on a mass scale, the project was abandoned in 2044. The only known prototype was displayed in the Washington, D.C. Museum of Technology in 2077. As of 2277 it is unknown where this weapon has gone to.

This weapon is only mentioned in Fallout 3.

Retrieved from "https://fallout.fandom.com/wiki/X277_%22Viper%22_magnetic_rail_cannon?oldid=3058731"
Community content is available under CC-BY-SA unless otherwise noted.