“Ahhh, trying to steal the X-2 transmitter array antenna, are you? You won't succeed, not if my lethal Robo-scorpions have anything to say in the matter.”— Doctor Mobius

When the Courier is first allowed out of the Think Tank and the Sink, they will be tasked with retrieving three pieces of technology. The coil from the X-2 facility is an easy one to do. After entering the X-2 facility, there will be minimal opposition. Three protectrons are spread out at various levels of the tower.

After dealing with or bypassing the protectrons, climb the ladder to the top of the tower and use the support arms of the transmitter to reach the X-2 antenna at the top. After grabbing it, the scientists will start to bicker again and Mobius will announce that the transmitter station has been overrun by his robo-scorpions. With the new shiny coil in hand, head back down into the facility. 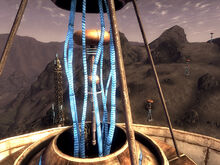 Close up of the antenna
Español Русский Українська
Community content is available under CC-BY-SA unless otherwise noted.
Advertisement