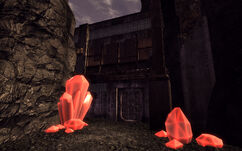 “When I thought sand and wind would never end... came to the crater. And there... there was an Old World facility, a weather station, at the edge, still raking the sky with electricity and generators.”— Ulysses

X-17 meteorological station is a location in the north of Big MT, in the northwest corner of the map, between the construction site, the Signal Hills transmitter and the X-22 botanical garden.

The entrance leads into a small office area, with an exit leading into a large warehouse. The warehouse perimeter, catwalks and staircases are patrolled by a unique Mister Gutsy robot named Ironbelly as well as a number of Mister Gutsy Mk variants.

On a raised central platform a small scale model of Higgs Village can be found. There is also a lab containing a terminal which can initiate a weather test, causing rain to fall on the model village. Once the weather test has been performed the dirt underneath the model is washed away to reveal a soggy duffle bag which contains random loot. Activating the weather test will also activate the fountain inside Higgs Village.

On the east wall of the warehouse is an elevator which leads to the roof. On the roof is a large container, a table, several filing cabinets and several Y-17 trauma override harnesses. 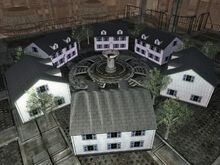 Higgs Village model in the center of the station 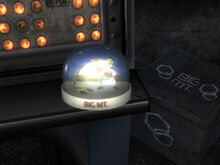 The snow globe
Add an image to this gallery
Retrieved from "https://fallout.fandom.com/wiki/X-17_meteorological_station?oldid=3054926"
Community content is available under CC-BY-SA unless otherwise noted.