Play sound
Serenity_(Dream_Town)_Modoc.ogg
“The infiltration program in X-13 felt spent, having repeatedly upgraded the Stealth Suit until it could upgrade it no more. It felt warm, fulfilled, and a bit sluggish. It realized not long after, the Stealth Suit had left it without so much as a note on the nightstand.”— Old World Blues ending slide

The X-13 research facility is a location on the westernmost border of Big MT in 2281.

The entrance leads to three labs, each containing one piece of the stealth suit Mk II armor. There is one area that can only be accessed with an upgraded sonic emitter. After the three labs, the Courier will reach the main room with metal walkways. One can then access a doorway on the right that opens to a small virtual reality test room which is no longer functioning.

From that same area, a stairway can be found on the left that goes downstairs to the night stalker test area, which leads to tunnels and the strange still. Alternatively, once all three pieces of the stealth suit have been retrieved, the player character can access the central door by unlocking it via the security terminal to the right, which leads to the X-13 Stealth testing lab section which has two levels. The top level consists of walkways which function as observation points for researchers above the stealth testing area and the lower level is the test track for the stealth suit Mk II and the associated quest, Project X-13. 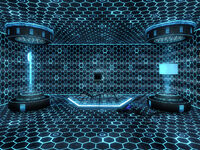 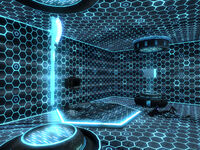 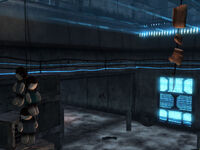 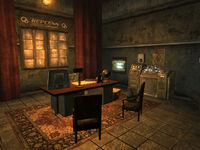 The administrator's office, X-13 document in the wall safe 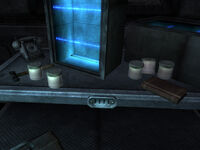 The X-8 kennel key, in the suitcase on the right

LAER on the roof