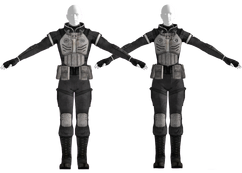 “The psycho-analytic cardiac-dampening sneaky stealth suit, a suit like NOTHING this world has ever heard, seen, or could EVER see!”— Borous

X-13: Attack of the Infiltrator! is a main quest in the Fallout: New Vegas add-on Old World Blues. The Courier is tasked to find all the Stealth suit Mk II individual suit components.

Upon completion, the Courier is awarded with the "Cardiac Arrest!" trophy/achievement. Part of this quest overlaps with the subsequent Project X-13 and the suit itself.

The gloves, straight ahead after entering

The chest plate, room to the left

The boots, room to the right

The wall safe in the administrator's office, containing the X-13 document
Add an image to this gallery
Retrieved from "https://fallout.fandom.com/wiki/X-13:_Attack_of_the_Infiltrator!?oldid=3173755"
Community content is available under CC-BY-SA unless otherwise noted.