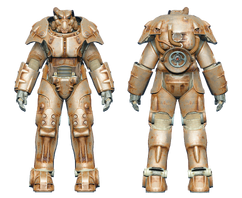 All stats based on X-01 Mark I full set totals

“The X-01 series of Power Armor was specially engineered and employed by remnants of the U.S. military after the Great War, and offers increased protection over the older, pre-war models.”— VDSG Catalogue No.9528

A variant of the X-01 power armor was still in testing phases with the scientists at Nuka-World in 2077 as a part of a cooperative initiative between the U.S. Military and Nuka-Cola Corporation when the bombs fell.[1] This unique variant is known as the Quantum X-01 power armor, and can be found at Starport Nuka.

It was later engineered by remnants of the U.S. military after the Great War. It improves upon older suits by offering superior protective abilities.[2]

Similar to the T-60, it appears to have a large blind spot (mainly due to the large shoulder plates) around the arms and back as they rise over the helmet. However, the oversized shoulders would provide ample spaced armor protection from various projectiles, both covering the neck joints without restricting mobility, and by adding another layer of armor to go through.

As with all power armor in the Commonwealth, a power armor frame is required to mount X-01 power armor, and spawned pieces can vary from Mk. I to Mk. VI models. 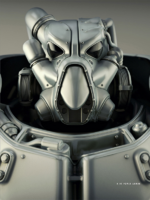 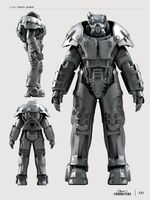 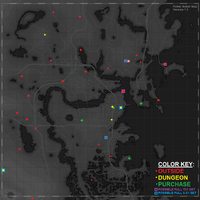 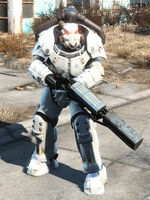 Retrieved from "https://fallout.fandom.com/wiki/X-01_power_armor_(Fallout_4)?oldid=3133637"
Community content is available under CC-BY-SA unless otherwise noted.