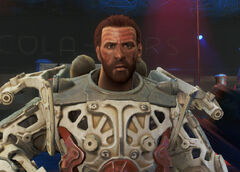 Wretch without his helmet

Wretch is a raider who has successfully navigated the Gauntlet, and as a result, is in the Cola-cars arena during Amoral Combat.

Wretch appears only in the Fallout 4 add-on Nuka-World.