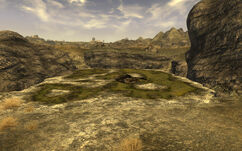 The wrecked Highwayman is a location in the Mojave Wasteland in 2281. Located northwest of Snyder Prospector Camp and southwest of Clark Field, just off of Highway 95.

The location consists of the wreck of a Chryslus Highwayman, with the remains of such sinking into the ground. As of 2281, only the trunk of the car is visible. A footlocker can be found within the open trunk, containing random loot in addition to microfusion cells, energy cells, some scrap metal, and a Sunset Sarsaparilla star bottle cap.

The wrecked Highwayman appears only in Fallout: New Vegas.

View from the southeast

Contents of the trunk

Retrieved from "https://fallout.fandom.com/wiki/Wrecked_Highwayman?oldid=3470646"
Community content is available under CC-BY-SA unless otherwise noted.