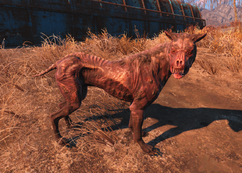 The wounded dog is a mongrel found in the Commonwealth in 2287.

The wounded dog is a random encounter where one can approach a wounded passive female mongrel.[1] Her right legs are at 0 health when examined in V.A.T.S.

Encounters confirmed to happen at:

Mutt will follow the Sole Survivor around within a relatively large area if they don't walk too far away. The encounter at the Starlight under the Railroad bridge will have Mutt follow as far as the restaurant overhang at Starlight. She cannot be assigned or interacted with in build mode like one would a purchased junkyard dog. Mutt will not interact with a dog house if placed. Pickpocketing a dog collar into Mutt's inventory won't have any effect. Very rarely, Mutt may turn up in random locations after the first encounter if she was aided. However, she may turn up in settlements as a guard dog.

The wounded dog appears only in Fallout 4.

Retrieved from "https://fallout.fandom.com/wiki/Wounded_dog?oldid=3125525"
Community content is available under CC-BY-SA unless otherwise noted.