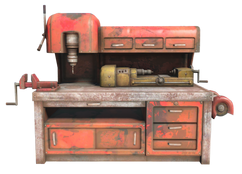 The workshop is part of the crafting system in Fallout 4 and deals with buildings and furniture at settlements. The Sole Survivor can use the workshop to move, deconstruct, or create new objects from scrapped material. These objects can be used to create thriving settlements with turrets, walls, vendors, and recreational spots.

The Sole Survivor must first interact with the physical workshop. This will add it to the locations they can build settlements.Some workshops will not be available to use and will only appear as Search. This is because the Sole Survivor must ally with the settlement that the workbench belongs to. After the initial inspection, activating the workshop object will allow to Transfer items to or from it.

However, the player character does not need to go up to the Workshop and activate it each time they wish to use it. If holding down the Change View Button ("V" key on PC, "Change View/Left Menu" button on Xbox One and the Touchpad on Playstation 4), it will open up the workshop menu as long as the Sole Survivor is within the build area of the workshop.

To build an object[edit | edit source]

The player character can also scrap, store, and move objects in this menu.

To select an object[edit | edit source]

This section is transcluded from Fallout 4 settlement objects. To change it, please edit the transcluded page.

Every workshop is located at a settlement which are located throughout the Commonwealth.

Vault 88 is the only settlement in the game with more than one workshop, possessing a total of four. 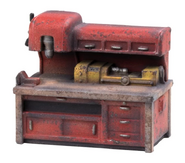 Fallout: Wasteland Warfare model
Add a photo to this gallery
Retrieved from "https://fallout.fandom.com/wiki/Workshop_(Fallout_4)?oldid=3413190"
Community content is available under CC-BY-SA unless otherwise noted.
... more about "Workshop (Fallout 4)"
RDF feed
Has platform
PC +, Playstation 4 +  and Xbox One +