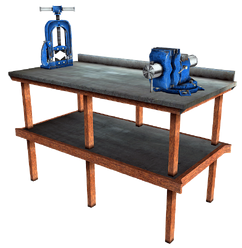 The workbenches in the Capital Wasteland and Mojave Wasteland are used to create custom weapons, with those found in the Mojave also allowing the crafting of additional items and the recycling and conversion of Energy Weapons ammunition.

Workbenches found throughout the Capital Wasteland and Mojave Wasteland, are utility work stations comprised of a two-level wooden work table with a metal surface, a rotating bench vise, and a pipe or yoke vise. They facilitate the unique feature of crafting homemade weapons and explosives from various junk items. Most workbenches found will have several tools (and in the Capital Wasteland, often a bottlecap mine) on the work surface or lower shelf.

In Fallout 3, a schematic of the weapon or explosive one is trying to create is required in order to make it, in addition to whatever items are required for its production.

Unlike in Fallout 3, most (but not all) items do not require schematics in order to craft. Instead, they depend on certain Skills, such as Survival and Repair.

Fallout 4 has a different mechanic for crafting, where workshops found in certain locations are used to construct the settlement nearby. Specific workbench types, for example armor workbench and weapons workbench allow customizing items through mods, which may change the attributes and appearance of the weapon considerably. No special ammunition can be crafted, although some weapon mods and Legendary weapon effects affect both what type of ammunition the weapon accepts, as well as how that ammunition behaves.

Collector's Edition playing card, vice and clamp
Add a photo to this gallery
Retrieved from "https://fallout.fandom.com/wiki/Workbench?oldid=3496402"
Community content is available under CC-BY-SA unless otherwise noted.