Wonders of Technology is a single-stage overseer quest in Fallout Shelter.

The first few rooms have pairs of deathclaws as enemies, followed by a few groups of molerats in threes. The boss room has an alpha deathclaw with four regular deathclaws. Keep an eye out on the health of the dwellers, especially the one being attacked by the alpha, and focus fire them one at a time. The lower levels have more molerats, one in a group of four. There is a broodmother with two regular molerats, focus fire on her during that fight.

"Ah, hello there! I am Dr. Hurfburg. Do you like my disguise?
This project has been a disaster! The robots do nothing but explode!
And all that noise has attracted some very unsavory creatures!
Here, please take these leftover parts. They're of no use to me!" 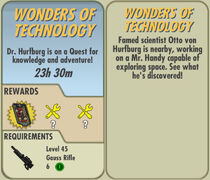