First put to market in 2016 by WonderGlue,[1] wonderglue became the staple adhesive in the American home until the onset of the Great War. Afterwards, wonderglue was still a sought-after commodity for the crafty survivalist that needed to stick two things together easily.

Wonderglue is a strong adhesive, used for all sorts of household applications before the Great War.

This brand of wonderglue comes in a larger bulk bottle.

This is a preserved container of wonderglue, without any aging or wear. 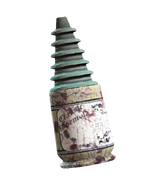 In Fallout Shelter
Add a photo to this gallery

Retrieved from "https://fallout.fandom.com/wiki/Wonderglue?oldid=3299445"
Community content is available under CC-BY-SA unless otherwise noted.