Wolfhorn ranch is a farmstead in the Mojave Wasteland in 2281. It is located east of Nipton, just south of where Nevada 164 divides to Ranger Station Charlie in the north and to Camp Searchlight in the south.

Once a successful bighorner ranch, it seems to have been recently abandoned by its owner, Ulysses.[Non-canon 1]

The main building exists as a one-room shack, containing a stove, armor locker, two lockers, and a bed. Surrounding the building is evidence of recent farming. There is a windmill, constructed walkways, crops, and various tools littered around the area. There is also an irradiated water source just outside the ranch. Near the flag pole is a grave, overlooking Nevada 164. A radio nearby will be tuned to Radio New Vegas. 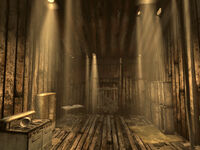 The location of the Chopper, inside the farmhouse

Getting a better signal