Wolves are creatures found in Appalachia.

Unlike most other creatures in the wasteland, wolves do not have any visible mutations. The radiation in the environment has not effected their appearance, as they maintain consistent coats of fur. Despite the lack of external mutations, wolves still harness pointed teeth and sharp claws that are utilized to attack enemies.

Wolves usually travel in packs and charge hastily at enemies to attack. They can prove to be tough opponents when together, easily being able to overpower lone player characters in close quarters.

The most common type of the wolf found all over the Forest region.

A stronger variant that can sometimes be the pack leader for a group of vicious wolves.

A much stronger variant usually found in the Savage Divide.

Strongest variant apart from glowing wolves. Usually found in the Savage Divide at the earliest opportunity and later in the Mire and Cranberry Bog.

Glowing wolves represent an upper-tier subtype of their species and deal additional radiation damage on hit. Like all glowing creature variants, they boast significantly higher resistances and damage output than their weaker cousins. Their threat level should therefore not be underestimated.

A charred, fleshy wolf infected with the Scorched Plague. All regular wolf variants have a corresponding Scorched variant with the same stats, abilities, and items. They may become Scorched when attacked by scorchbeasts or the scorchbeast queen, becoming allies with other Scorched creatures.

A single-star legendary variant encountered during the Leader of the Pack event quest. It appears to have almost no fur with a skinned burned look.

Wolves are a potential candidate for taming. If found alone in a random encounter, the player character can send the tamed beast to their C.A.M.P. for defense. 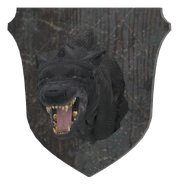