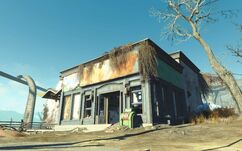 Wixon's shovel museum is a location in Nuka-World in 2287.

The museum consists of two floors. On the first floor, there are several display cases with various items, mostly shovels, in them. Next to some of the display cases, there are plaques that have descriptions of the shovels. There is also what appears to be a gift shop for the store as well. On floor behind cash register there is Advanced-locked safe.

On the second floor, there are a few desks with broken terminals. One of the terminals is functional and has some corrupted files along with a letter of resignation.

Settlers and scanavgers make this location their home, and are at times attacked by members of the Pack.

“This shovel was used by our 16th president Abraham Lincoln's cousin's neighbor to prepare a latrine hole in 1862 that the president himself might have used!”
“Used by actor Keith McKinney in the film Ditch Diggers of Dusseldorf, this shovel was actually the stunt prop for the McKinney's shovel used in the more dangerous action sequences.”
“The item you see before you is not technically a shovel, but an example of the 'long handled spade,' most popular between April 3rd and April 7th 1963.”
“Private Jean Luc Allard used this very shovel as he followed Napoleon's horse in ceremonial parades throughout Europe. Please do not touch.”
“The first shovel originated in neolithic times and was probably made using an animal's shoulder blade. This is a replica of what that shovel may have looked like if it was made in modern times in Mexico.”
“British Shovel Fighters were some of the most feared and deadly warriors of the Revolutionary War. They were known for their pristine ditches and the uncanny ability to deflect rifle shot.”

Wixon's shovel museum appears only in the Fallout 4 add-on Nuka-World.

Get your shovels, we are under attack!
Add a photo to this gallery
Retrieved from "https://fallout.fandom.com/wiki/Wixon%27s_shovel_museum?oldid=3501120"
Community content is available under CC-BY-SA unless otherwise noted.