Raider leader
Leader of the ghoul-haters 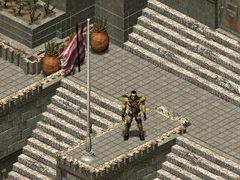 “That's far enough, ghoul licker! I can't let you ruin my plans. Those ghouls aren't human! Why would anyone want to give them regular, God-fearing, human rights? It ain't fair to all the honest pure bloods. My plan was perfect, and I would gotten away with it if it wasn't for you meddling soldiers.”

The "Old Man" Withers, also known as the head assassin of ghoul-haters, was the leader of a raider group in 2197.

His raider group came to Springfield in order to eradicate its ghouls and overthrow the mayor Chris Avellone. He was a young man who was skilled in combat, using a shotgun against his enemies. The group he led, while it appeared to be just another raider gang, was a party of ghoul-haters who were annoyed by the mayor's pro-ghoul politics. The group was quite large and included not only regular members (called simply raiders in-game) but also some elite, experienced warriors called "enforcers."

The head assassin, as he presented himself during the attack, was found and killed by the Warrior along with all of his men.

Retrieved from "https://fallout.fandom.com/wiki/Withers?oldid=3363786"
Community content is available under CC-BY-SA unless otherwise noted.