24h
“I've found a ransom note written by a Raider Boss named Willard Glover. He says he's captured a settler and taken him to the nearby Corvega Factory.”

With Friends Like These is a single-stage quest in Fallout Shelter. This quest can be found in a random container during an unrelated quest. After the dwellers return to the vault, the quest will be available in the overseer's office.

The dwellers must make their way through several rooms of mole rats until they reach a room full of raiders led by Willard Glover. After killing them, they continue forward. Once they have found the settler they are free to leave. The mole rats often have a broodmother among them, which one may want to target first so they don't call in reinforcements. 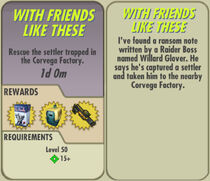