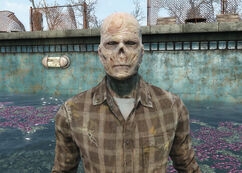 Founder and leader of the Slog

Wiseman is a male ghoul residing in the Commonwealth in 2287. He is a former resident of Diamond City, founder and leader of the Slog.

A soft-spoken and friendly man, the Sole Survivor can speak to him about his past and the community he founded upon first discovering the Slog. Wiseman fled from Diamond City following a decree by Mayor McDonough exiling all ghouls from the community. Instead of traveling to Goodneighbor along with the majority of the ghoul population, he instead founded "the Slog" within an old public swimming pool. Intending the establishment to be a safe haven for persecuted ghouls, it eventually grew into a tarberry farm - one of the sole producers of the fruit in the Commonwealth.

The settlement gained the name "the Slog" when a trader decided to take refuge there following a long trip. When talking about the trek with Wiseman, the trader described the entire journey there through the mud as a "slog," and following the eventual departure of the traveler, Wiseman decided to use the name for his settlement.

Wiseman appears only in Fallout 4.

Retrieved from "https://fallout.fandom.com/wiki/Wiseman?oldid=3297086"
Community content is available under CC-BY-SA unless otherwise noted.