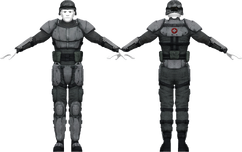 Winterized medic armor is nearly identical to winterized combat armor, except that the armor is less beat up and dented, it has different textured shoulder and shin plates, it has the medic symbol which appears on the armor's back and it is missing the balaclava and gloves. It has the same Damage Resistance and gives +10 to Medicine.

Winterized medic armor is lootable from the bodies of Elliott Tercorien's squad members or Elliott himself in the cryo lab. If Elliot dies, his squad will appear as mere wastelanders, and the two with winterized medic armor won't appear. This can also happen if most of the cryo lab is cleared out up until the encounter with Elliott's squad before recruiting him to follow the player character. This means the winterized medic helmet will no longer be available.