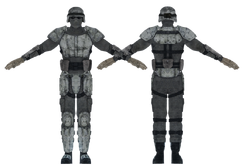 Combat armor and its variants

Combat helmet and its variants

The winterized combat armor is a variant of the regular combat armor used by the United States Armed Forces and is one of two armors worn by US troops (the other being winterized T-51b power armor) during the Anchorage Reclamation campaign in Alaska. The helmet of this variant features a balaclava and a pair of combat goggles that protect from snow glare, and the armor also has sleeves added.

Like all versions of combat armor, it was designed to sheath the human body as completely as possible in high durability armor. The primary skin of combat armor is composed of complex polymers and ceramics. This hard armor was manufactured as specific plates, with a matte-finish white coloring suitable for winter camouflage. These plates are affixed to a flexible bodysuit woven from projectile- and energy-resistant, fire-retardant materials. Like most of the items introduced in Operation: Anchorage, it has two variants - a simulation variant (with 999,400 HP) and a Wasteland variant (with normal HP).

The variant obtained with the Gary 23 glitch does not degrade and under the effects screen, it provides the same statistic bonuses as the T-51b power armor, with the exception of the damage resistance boost.

The winterized combat armor appears inside the Anchorage Reclamation simulation at the Outcast outpost. The player character will receive a set at the start of the add-on. It is possible to obtain an infinite health (simulation armor) set through the Gary 23 item glitch along with every other item acquired in the simulation. 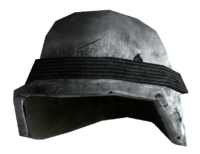 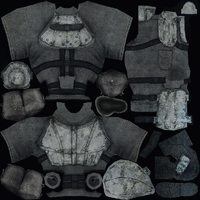 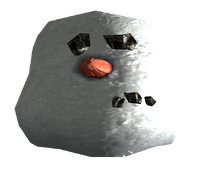