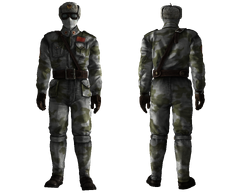 The suit is nearly identical to the Chinese jumpsuit, except it has a winter camouflage pattern, better suited for operating in the Alaskan environment. Unlike the non-winterized version, it does not provide a bonus to Small Guns. Like most of the items introduced in Operation: Anchorage, it has two variants - a simulation variant (with 999,100 HP) and a wasteland variant (with normal HP).

The hat is similar to the Chinese commando hat but features an additional white balaclava and goggles. Like the suit, it is also missing the bonus of its non-winterized counterpart and, like the jumpsuit, there are both a simulation and wasteland variant with different item HP values. Both the suit and hat can be repaired using their non-winterized equivalents. 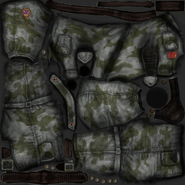