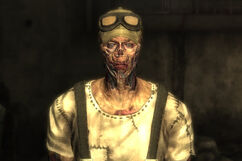 “It was a good idea at the time, y'know? Figured we'd try and set ourselves up down here. Just like Underworld, only better.”

Wint is a ghoul found in Old Olney underground in the year 2277.

Wint was part of a group of likeminded ghouls who decided to forge ahead into unexplored territories under the leadership of Sanders, and set up a new ghoul settlement to rival Underworld. One of only two remaining survivors, Wint isn't staying around to watch any more of his friends die. He considers the whole plan an absolute disaster, and would have throttled Sanders himself if the deathclaws hadn't got to him first.[1]

Wint appears only in the Fallout 3 add-on Broken Steel.

His name is a reference to Mr. Wint, a character in Ian Fleming's novel and similarly titled James Bond film, "Diamonds Are Forever" who also has a partner named Mr. Kidd.

Retrieved from "https://fallout.fandom.com/wiki/Wint?oldid=2755549"
Community content is available under CC-BY-SA unless otherwise noted.