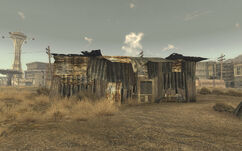 A Pair of Dead Desperados, II

The Wins hideout is an unmarked location in the Mojave Wasteland. It is located halfway between Westside and the H&H Tools Factory.

It is a small house, with a pile of tires near the front door. Next to the house is a deck containing a couch, a tricycle, a washing machine, and two ammunition cases. When entering the house, Sammy and Pauline Wins are standing in the middle with a bed to the left and a couch to the right. A safe is in the far right corner with a lamp. There is a refrigerator on the far left side with some food and wine. The location is part of the quest A Pair of Dead Desperados, I.

The Wins hideout appears only in Fallout: New Vegas.

The combination to the safe, 05-23-34, corresponds to the date on which the real world equivalent, Bonnie and Clyde, were killed in an ambush near Gibsland, Louisiana.

Schemin'
Add a photo to this gallery
Retrieved from "https://fallout.fandom.com/wiki/Wins_hideout?oldid=3454397"
Community content is available under CC-BY-SA unless otherwise noted.