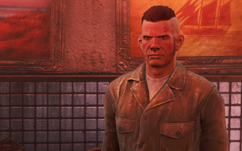 Winlock is a Gunner living in the Commonwealth in 2287.

Winlock is a Gunner that can initially be encountered at the Third Rail harassing MacCready. He and his friend Barnes will then relocate to the Mass Pike Interchange, an area the Sole Survivor must accompany MacCready to in order to teach them a lesson.

According to his forehead tattoo, Winlock's blood type is O-positive.

Winlock appears only in Fallout 4.

Retrieved from "https://fallout.fandom.com/wiki/Winlock?oldid=3290319"
Community content is available under CC-BY-SA unless otherwise noted.